As the shuttle door opened, Mayor Herzog took a deep breath. She was pleased that the plan to come into Luna's docks was scrapped. The Prime Minister was so mercurial.

"Analiese!" Jones Oden stepped out with a big smile. Quickly closing the distance between them, he extended a hand, saying, "it's a pleasure to see you again, Mayor."

"I feel much the same," she lied, shaking the proffered hand. "They tell me you haven't much time. Shall we get moving?"

"Moving?" Oden flashed his trademark grin. "Back to your office, I trust? You were so insistent that we not land at the docks, I assumed that meant we weren't headed that way."

"Ah, oh." She bit her lip, aware that the Prime Minister had treated the situation as a political game. "My car is ready to take us back to the office right now."

The ride was mercifully short. Oden refused to talk business which rankled the Mayor. At one point, when she tried, he pressed his lips together, shook his head paternally, and motioned to the driver. She couldn't believe this man.

Finally within the secure confines of her office, door shut, he seemed ready to hear her out. Unwilling to suffer another of his mental meanderings, she leapt into action.

"I worry about the docks," she began. "As our fleet of water ships expand, so does the traffic to the lunar docks. I'm concerned about what will happen to Siriancity as a result, should security remain as it is."

"Concerned in what way?" He grinned, eyebrow raised, trying to bait her. "Would you prefer that I build out another set of docks, and shift some traffic away from Watervliet and Siriancity?"

"Ideally, yes, Prime Minister," she replied, surprising him. "Unfortunately, that will take time. Kamal is close enough to the surface, and I've had conversations with Mayor Bakkar, such that he'd be willing. We need to address the here and now, however."

"We're all the denizens of Earth's moon, no? And Luna is a member of the Olympus Union." She shrugged. "I've run projections, and believe Siriancity will continue to flourish, even if our mercantile traffic were to stagnate. Spreading the wealth merely benefits the Olympus Union. Again, though, sir," she allowed some steel to creep into her voice, "that isn't what I wished to speak to you about."

"Of course." Oden opened his hands. "Tell me more of these security concerns."

"We've seen rowdy behavior by water troops on leave, during water exchanges. Destruction of property, theft, assault, and even the death of one young man. We've had difficulty prosecuting because the Krakens cover for each other, and we don't have enough security forces to police the area."

"Yekong Mu is already seeing similar issues, and his Stillwater docks are still much smaller than ours. Fuzhou is considering closing many of the Stillwater establishments, and banning the Krakens from the inner city. Of course, experiments to that effect have led to… other problems."

The pair fell silent as the office door opened slowly. Shondel Wiedeman, Herzog's parolee from Athena's Clutch, shuffled in to serve a drink. The man looked dazed, as usual, just able to accomplish the menial task.

Oden accepted a glass of brownish liquor. He smiled and silently toasted the parolee, but Wiedeman was too foggy to notice or understand. Shondel left another glass, along with the glass decanter, on the Mayor's desk, and shuffled back out. The Prime Minister took a long sip as the door slowly swung shut.

"What are these other problems?"

"We have rumors of corrupt officers and organized crimes operating in-"

"Rumors?" It was Oden's turn to cut off Herzog. "You can't expect us to commit copious resources to the elimination of rumors, can you?"

"We have strong suspicions," she sighed forcefully, "that have been corroborated by Mayor Mu in his own district. As I said, it appears to be an outgrowth of the presumed lawlessness of the docks. If we could clean one up, we'd likely need no more than a small but public investigation to discourage further activity."

"You're truly concerned about this," he said, leaning forward, "aren't you?"

"Of course I am!" she replied, incredulous. "We've mapped out many scenarios where the result is a disruption of the water ships, and a dangerous impact on the Olympus Union, as a whole. I'm more than happy to show you the data, sir."

"Yes, actually," Oden stood, "I'd like to see that. In fact, if you would, send that on to the Ministry of Peace. My time here is at an end, but I will certainly consider your requests."

The pair shook hands, and she opened the door for him. As he walked down the hall, she returned to her desk, ready to get back to work. She'd send the data over to the Ministry shortly. Then, she'd schedule another meeting with Fuzhou mayor. Until she saw otherwise, Mayor Herzog assumed assumed they were on their own.

"Your meeting with the Mayor went well, I presume," Anat Meron said. The shuttle's communication system caused her voice to sound more stitled than usual. "Have you gotten what you wished from her?"

"I think so," he nodded. "Either she's a truly convincing liar, or Analiese Herzog is among our most loyal administrators. She cares more for the Union than her career, it seems."

"That would appear a positive. Why do you seem disturbed?"

"Just a few things that she told me. It was hard to keep up the act, towards the end." He eased back into a smile. "It sounds like some of our people have overstepped their bounds. Your office will be receiving data. Have Hopkins look into it."

"Stall Hopkins has his role," she said, "allow me to have this data analyzed first, and then assign the appropriate deputy."

"Do as you will," Jones waved a hand. "And look into her request for more security personnel. Herzog wasn't wrong, we do need to secure the docks. Let's support her. There might be big things in her future."

Who populates the Olympus Union science fiction universe? The Olympians, the Jovians, and the folks in between. Farmers and soliders, pilots and politicans, a great many individuals spread across the solar system. Many take up sides and fight for ideals, while others are just hoping to get through each day. 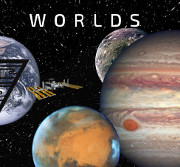 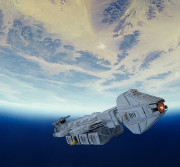 Humanity's battle over water, key to expanding beyond Earth, causes war to rage across the Olympus Union. Who will control Jupiter and its water rich moons? Dominant personalities foster tensions, which reverberate across the solar system.

Get the ebook that reboots the Olympus Union science fiction universe, and follow from the first glimmers of hope... to all war around Jupiter!